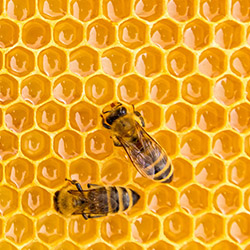 The use of neonicotinoid pesticides has increased significantly since the introduction in the 1990s. Currently, they represent a quarter of the world’s insecticide market. By eliminating of patent protection, the production of cheap generics in India and China has also become available. The most used substances are imidacloprid, thiamethoxam, clothianidin, acetamiprid and thiacloprid (see Appendix for more information).

The substances are particularly relevant for bees due to the comparatively high toxicity. For example, 4 nanograms (0.000 000 004 g) are able to kill a bee. For these reasons, the European Commission considered that the use of neonicotinoids is only acceptable for plants which are unattractive for honeybees, and the application is only permitted after flowering.

Despite extensive restrictions on the use, neonicotinoids are often detectable in honey, even though legal limits are rarely exceeded. German consumers’ magazines are also devaluating honeys with concentrations below the maximum residue limit, as the current “Ökotest-Magazin” issue 11/2016 shows.

According to the analyses made by routine samples by QSI, the following results were obtained in more than 3500 samples: Acetamiprid and thiacloprid could be detected in 7% of all samples. This high proportion ultimately reflects the frequent use in agriculture. However, the positive news in the case of acetamiprid is, that the maximum residue level of currently 50 μg / kg (see appendix) has only been exceeded in two samples tested.

The German “BNN guideline” is often used for evaluation of organic honey with a maximum value of 0,010 mg/kg. In our recommendation any organic honey should be checked to this stricter limit, since, even in the best beekeeping practice, you can never rule out that the bees have visited plant material with neonicotinoid residues.

We would be pleased to analyze the entire substance group of the neonicotinoids in honey or bee products. On request, we can also perform the analysis of single substances only.

We’ll be delighted to send you a Quote!