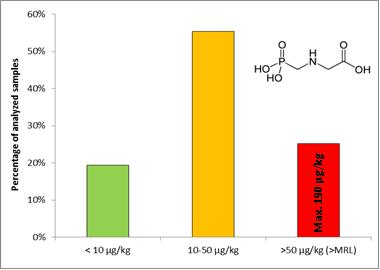 Glyphosate (“Roundup”) is a non-selective herbicide used since 1974 in many countries worldwide. Lately, there is an emotional discussion in the media (related to the prolongation of the authorization until end of 2017 by E.U.) and the number of reports on residues of glyphosate in food increased substantially.

Due to the high polarity of Glyphosate it is not possible to analyze it together with the other pesticides in the standard screening method, which is able to detect more than 600 pesticides. Owing to the need of using a single residue method, the existing information about Glyphosate residues in honey is limited.

According to a recent study1, in which 69 honey samples were analyzed, 59% contained glyphosate levels above the limit of quantitation (17-163 µg/kg, mean 61 µg/kg). Furthermore, 22 samples (32%) exceed the EU limit for glyphosate for non-organic honey (50 µg/kg).

In other words, every third honey in that study contained too high amounts of glyphosate and would not be marketable in the EU.

Regarding our own measurements (see figure), in which 103 honey samples were analyzed, 55,3% contained glyphosate levels above the limit of quantitation (LOQ: 10 µg/kg). Furthermore 25% exceed the EU limit.

The glyphosate level does neither seem to be dependent on the botanical origin nor on the growing method (organic/non-organic) of honey. Instead, levels seem to be higher in samples from countries that allow use of GMO, e.g. the USA, Latino America). However, also samples from countries not allowing GMOs (Germany and New Zealand) contained levels of glyphosate above the limit of quantitation.

To be on the safe side, we strongly recommend to our clients to test your raw materials for glyphosate in case this topic will be further focused on by consumers and authorities alike.

QSI offers the analysis of Glyphosate in honey in 48 hours. The method is validated and accredited under the scope of ISO17025. Please feel free to ask for an offer.